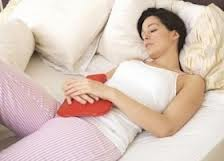 Endometriosis is a chronic disease and a gynecological condition in which cells from the lining of the uterus (endometrium) appear and flourish outside the uterine cavity, most commonly on the  membrane which lines the abdominal cavity, the peritoneum. The uterine cavity is lined with endometrial cells, which are under the influence of female  hormones. Endometrial cells in areas outside the uterus are also influenced by hormonal changes and respond in a way that is similar to the cells found inside the uterus. Symptoms of endometriosis are pain and infertility. The pain often is worse with the menstrual cycle and is the most common cause of pain during menstruation (also called dysmenorrhea) .  it has been estimated that endometriosis occurs in roughly 6–10% of women. There is no cause in Western Medicine for the occurrence of endometriosis. In The Netherlands it takes up to 6 years before the correct diagnosis has been made.

According to Traditional Chinese Medicine endometriosis can occur if a woman has a lack of energy. This means: she has “spended” more energy than ze had “in stock”.  Usually this process has been going on for a longer period of time (more than 1 year). Due to this lack of energy  the immune-system does not respond properly . It doesn’t clear up the endometrium-cells (which are located at the wrong place) and give i tchange to grow.

Traditional Chinese Medicine is used succesfully treating women  for over 2000 years.  Traditional Chinese Medicine, backed up with huge experience and wisdom, has a lot to offer to treat endometriosis (symptoms) very well.   As every woman is different, every treatment is different too. Treatments are always tailor-made for the best results. Best results are made if Chinese herbs are combined with changes in life-style and alterations in food patterns. Combination-therapy” where synthetic hormones are combined with Chinese herbs do give better results than single treatment with synthetic hormones only. See page ……….for results of combination-therapy.

Please call for a (Skype) consult to find out which herbs can treat you best. Press the button at the right side of this page “consult aanvragen”.

Not convinced yet?  Have a look at this page: ervaringen van klanten to find out the results of treated women. Praktijk van Hulst, specialised in treating endometriosis(symptoms) since 2006. Women from all over The Netherlands, Belgium and Germany have found their way to this practice for treatment.  Due to Skype, herbal treatment is available for all women diagnosed with endometriosis no matter the country they live in.